Keys to having a successful automotive repair shop don't stop at just hiring the most educated and top technicians. In fact, Vinnie was well informed on the high failure rate of automotive shops when strictly run by a technician.  Lets face it, automotive techs may not be the most personal and business savvy people.

Enter Amanda Simmons.  Amanda moved a little here and there as a child but since 1993 has called Louisiana home, specifically Slidell.  It was clear to her early in her working life that running a business and leading by example was what she was cut out for.  Becoming the store manager of a local Cici's Pizza restaurant shortly after high school propelled her in a direction to handle many of the behind the scenes business management roles, accounting, payroll, and inventory control to name a few. Looking for a change and recognizing her skill, Amanda accepted a job opportunity at a Covington, LA based print shop.  Quality employees are something that anyone, client or owner, can see very quickly and not surprisingly, Amanda moved into the role of store manager for 6 of those 9 years at the print shop.

Time and material are the two main facets of running an automotive shop, and the parallels between it and a print shop are alike in countless ways.  So for over a decade Amanda has been preparing for her role here at Vinnie's Exotics.  She has single handedly doubled the productivity of our shop and handles every aspect of our operation with the exception of working on the vehicles.  This has an effect of allowing the technicians to work methodically without interruption, decreasing down time of clients vehicles as well as ensuring a job done right.  After all, that is our ultimate goal. 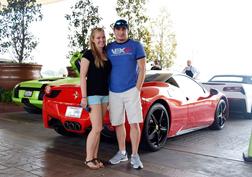 Vinnie began his interest in auto-mechanics in the late 90s working on family and friend's vehicles.  At the advice of his father, he enrolled at Universal Technical Institute in Mooresville, NC in 2005, with plans in mind of  becoming a Porsche® technician.  While in training, he worked for a Mazda/Suzuki dealership service department, gaining his first experiences with dealership service life.​  After graduating, he returned to begin a new career at the Porsche dealership in Baton Rouge, LA where he worked and trained, becoming a Porsche® Certified Master Mechanic.  Here is where he met most of his clients that are still with him today.  After seven years of loyal service, he left this dealership to further his career at a Porsche® dealership in New Orleans, LA.

It had always been a dream of his to own his own shop and be in business for himself.  After much advice and encouragement from his best clients and friends, in 2012 he began VEX as a promotional company, to bring together his exotic clientele base for exclusive dinners, drives, as well as co-sponsoring local car shows.  In October of 2014, Vinnie was able to open a single bay in a good friend's shop.  He worked there on a part time basis until making the tough decision to leave the dealer world for good and go all in for himself.  In January of 2015, Vinnie's Exotics was open full time and full service.

Nick began his interest in mechanics at a young age.  He would collect junk and bring it home to take apart and try and fix it or to use parts for other things.  In high school, he attended Monroe County area Vocational Technical School for automotive technology.  By his senior year he was working on his teacher's cars.  He placed in the Top 10 for the State of Pennsylvania for student technicians.

After high school he joined the United States Army as a Heavy Wheeled Vehicle mechanic, working on trucks 20 ton or heavier.  He also became a wrecker operator, driving a wrecker on several missions during his two deployments to Iraq.  After the Army, he attended Universal Technical Institute in Mooresville, NC where he met Vinnie.

After graduation, he moved to Baton Rouge to work at the local Audi®/Porsche® dealership alongside Vinnie, where he became an Audi® Master Field Technician.  After several years, he left to achieve his dreams of working on Lamborghini's.  He moved to Miami, FL to work at Lamborghini® of Miami.  He attended formal training in Italy at the factory during his four years with Lamborghini®.  He also worked on Pagani's and other high end exotics at Lamborghini® of Miami.  Striving to further his career and experience, he continued on to Ferrari® of Tampa Bay, working there for about a year before returning to Baton Rouge to team back up with Vinnie again.  We are very happy to have him!

Our mission is to make exotic car ownership an all around pleasurable experience.

Our focus is to give "quality vs. quantity"  service.  We want to make sure your experience is unlike any dealership service department.

Not only do we want to fix your vehicle, we want you to have fun with your vehicle.  The exclusive VEX Driving Club hosts dinners, drives, and other events to get to know your mechanic as well as bring local exotic car owners together.   We want our clients to be part of our VEX family.

​​​As you can see, we have set in place all the pieces to have a high level automotive shop working on high end and exotic vehicles that has not been seen in our area.  Friendly faces, knowledgeable staff are not just buzz words, they are actualities.  What we do is not just a job, its our lifestyle, and our calling.  We welcome you to stop by, experience our newest 14,000 sq ft facility and meet our staff.  We are a small shop doing big things for our local car market.  We hope to earn your business as well.